Slowly but surely I’m ticking things off my to-do list.

One of these such things, was to finish perfecting the color output for a run of prints made from this gemstone watercolor. It’s one of my favorite watercolors, so I was feeling pretty guilty leaving it for so long in an unfinished state.

So when I finally found an afternoon free this week, it was first on my list to accomplish. After finishing the color calibrations, (which I’ll admit took a bit longer than average to perfect) I made a full run of 25 prints on my Hahnemule fine art paper.

I am quite pleased with how they came out and may consider doing a bigger run in the future. I’ll need more paper though, I’m almost through my box 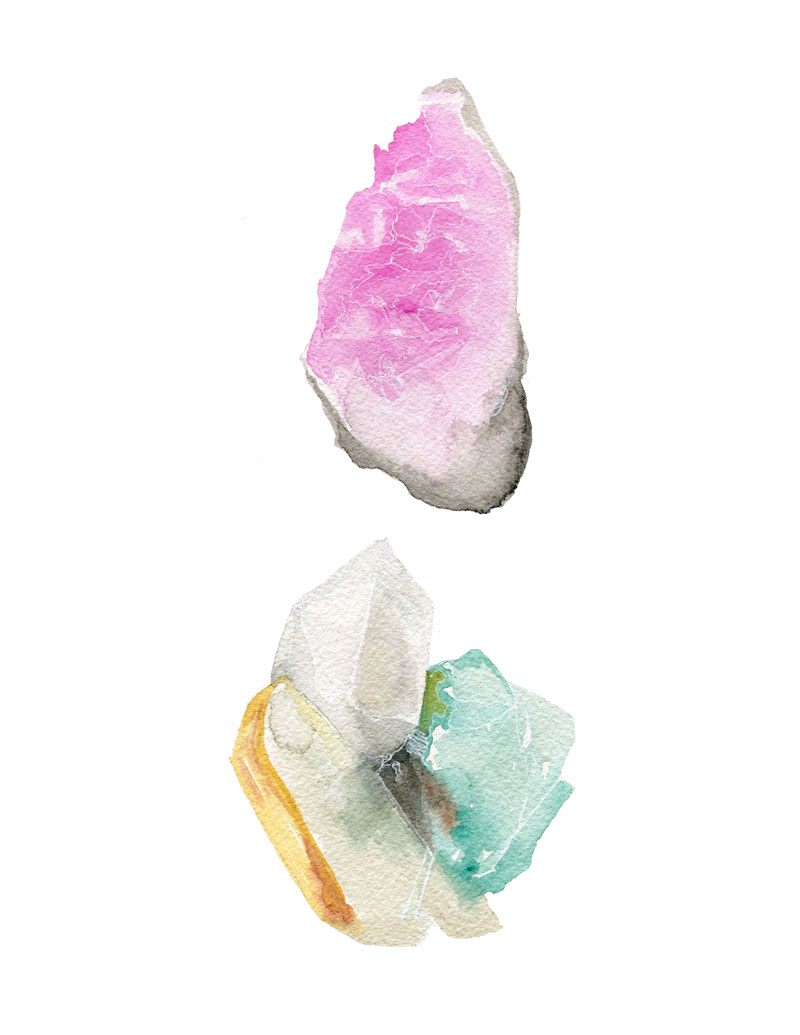 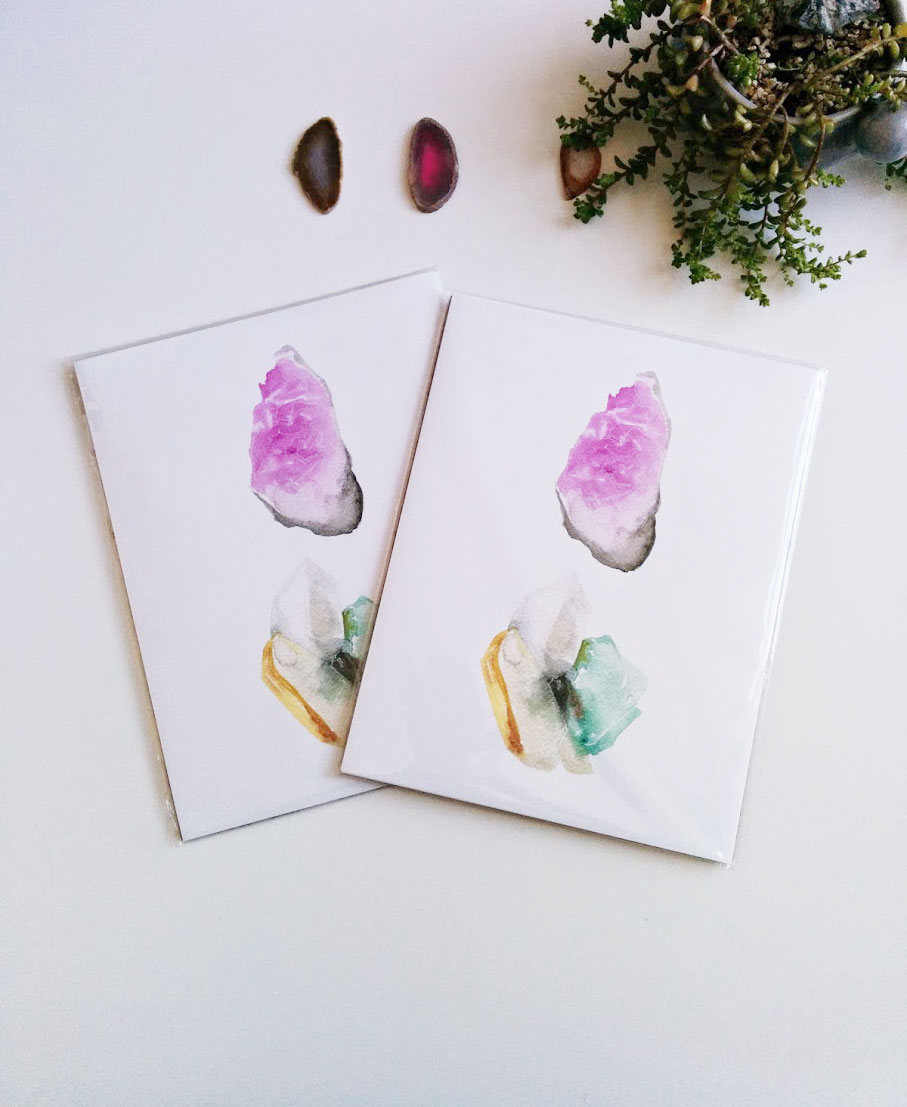 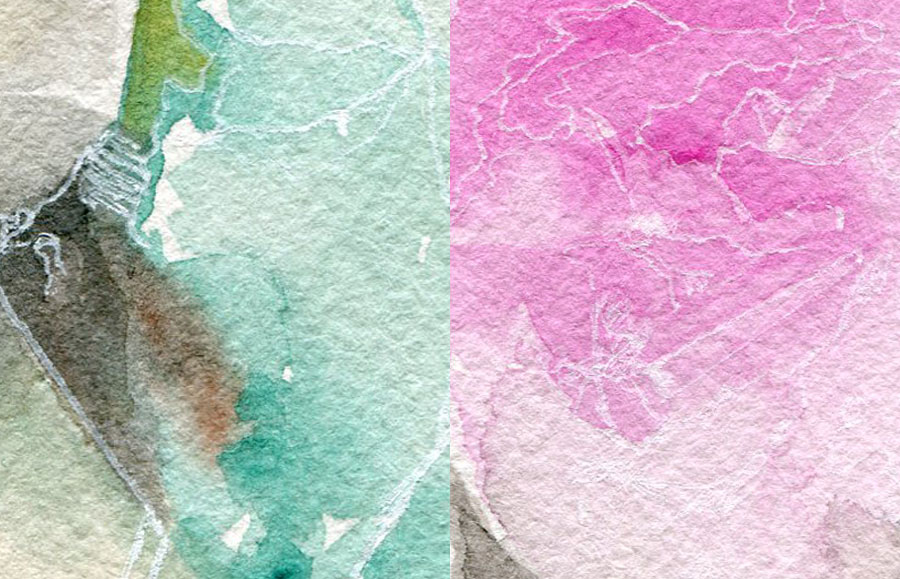 Awhile back I was making prints of some of my botanical drawings, and my poor printer had a *really* bad day. For some reason it decided to print everything within a giant square of gray, which was super disappointing. I fixed it (thankfully) and went on to make a run of perfect prints — but was sad that the others were wasted.

Until, I remembered I love to collage.

I spent the whole day cutting the prints out and arranging/rearranging them on various surfaces. I wove the leaves together, made patterns, stacked them other under tracing paper, and just generally explored. I haven’t set a final layout just yet, I’m still having too much fun playing. A final composition is my goal for the weekend 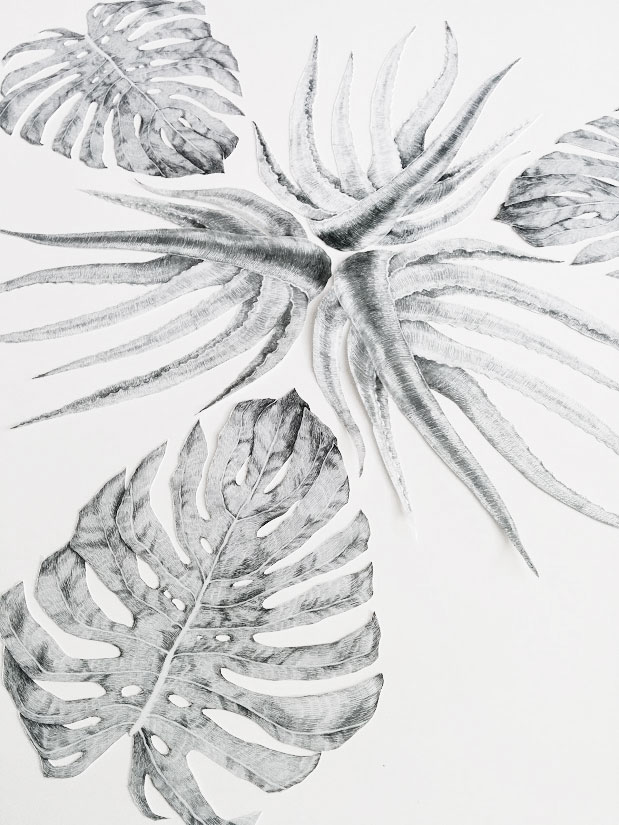 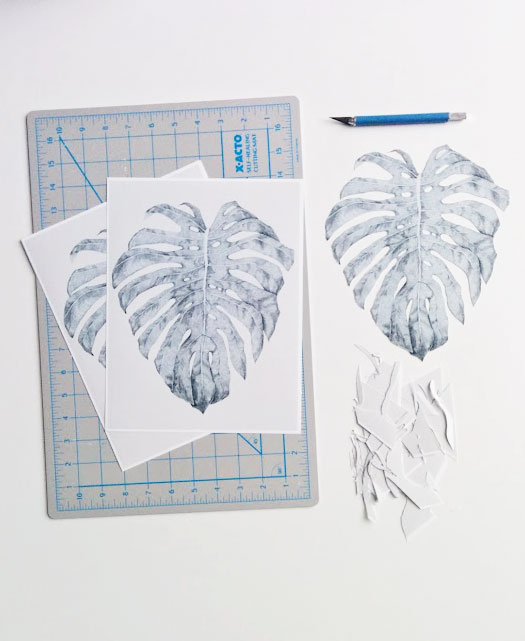 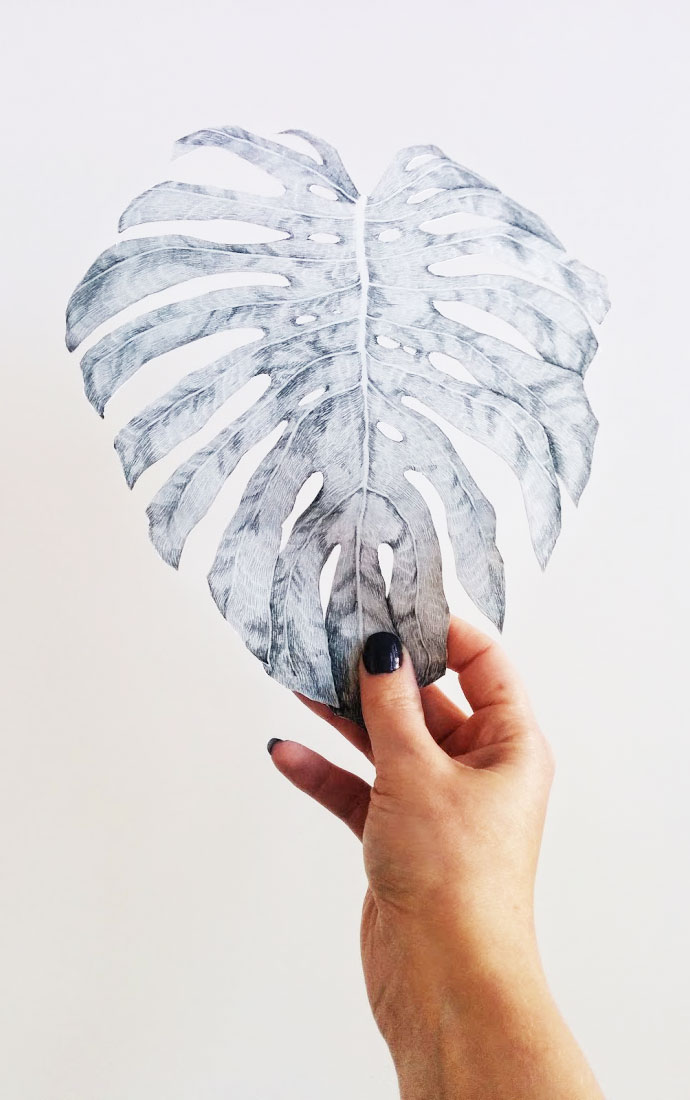 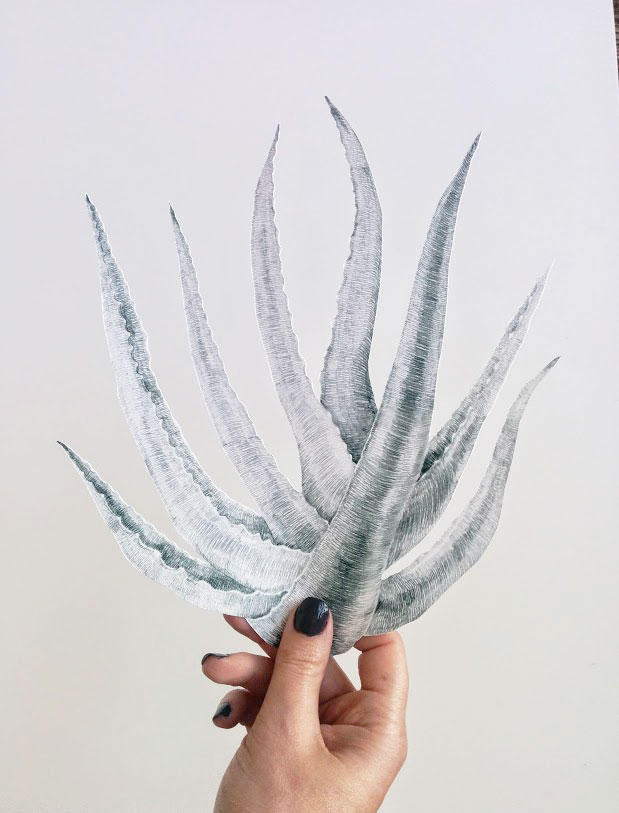 Perhaps it’s because I stayed up too late reading last night (4 am, whoops), but this morning was a rougher wake-up than usual. 3 cups of coffee later, I was still dragging. Rather than work on my current painting with a fuzzed brain, I decided to make a few watercolor washes and just play around until I felt a bit more alive. 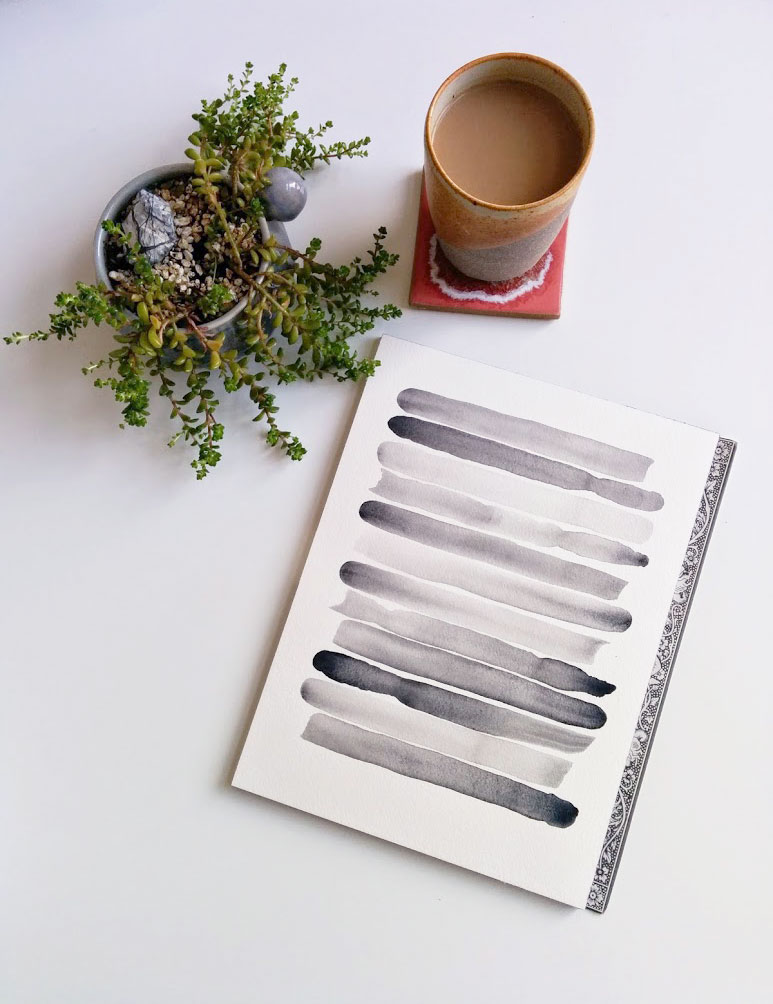 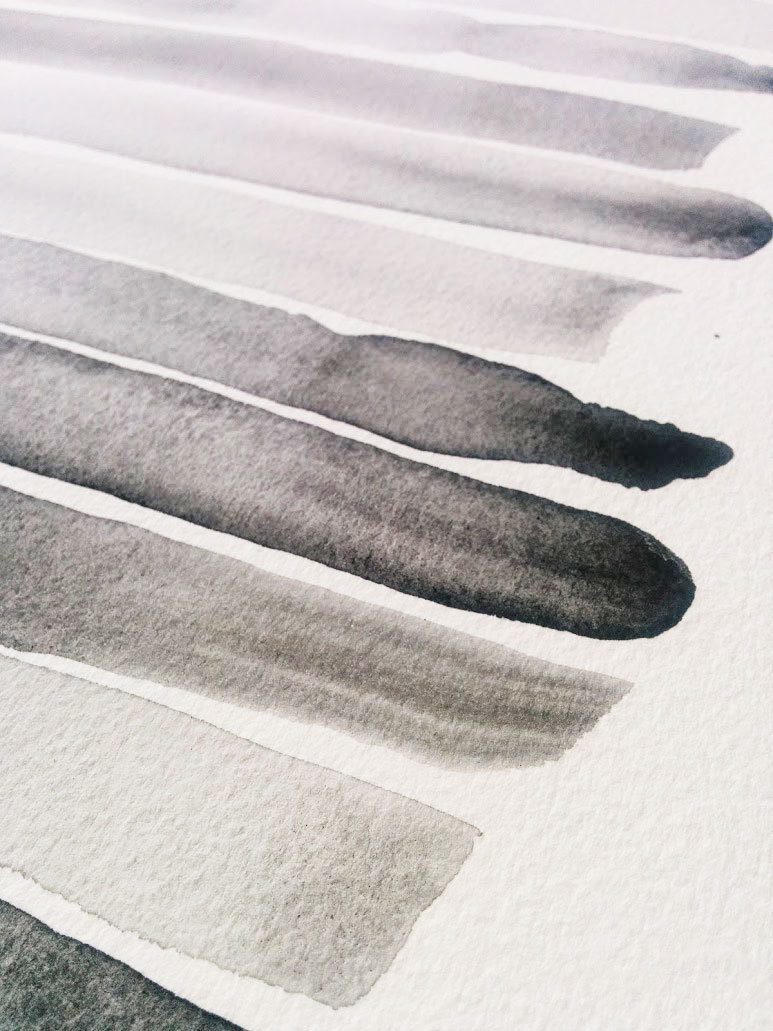 I really loved how the pigment ended up drying, one of the reason I adore watercolors. The extra edges that weren’t planned, the spontaneous blooming, the blips of paint that flicked off the end of the brush — it all makes me so happy.

Energized and creatively infused, I went back to the garden painting

Hope you all have a fantastic Friday and a very lovely weekend!

I FINALLY got myself over to the Perez Art Museum Miami last week for the final days of the Beatriz Milhazes exhibition — and I am so, so glad I did.

The first major US retrospective of the Brazilian artist’s work, Jardim Botânico featured rooms filled with her large-scale abstract paintings. Inspired by Brazilian and European Modernism, the Baroque and the Carnival; gallery walls came alive with her patterning and joyful use of color. Milhazes’ process relies unapologetically on the use of acrylic transfers (a process that is very near and dear to my heart), leaving behind delightful hints and clues about the creation of the work in the forms of cracks and bubbles in the surface.  The resulting texture is gorgeous, prematurely aged and fell somewhere between a candy shop and the royal bedroom of Versailles. It is a blend that I found entrancing.

I did however find myself more drawn to the organic references of her earlier work. Some of the newer and harder-edged abstracts did not captivate me as completely. Oh well, to each their own.

I wish I could say ‘Go see the show!’ but unfortunately, it has already closed  (I was lucky enough to get there the day before). But I will definitely be following her to see where she’ll be next! 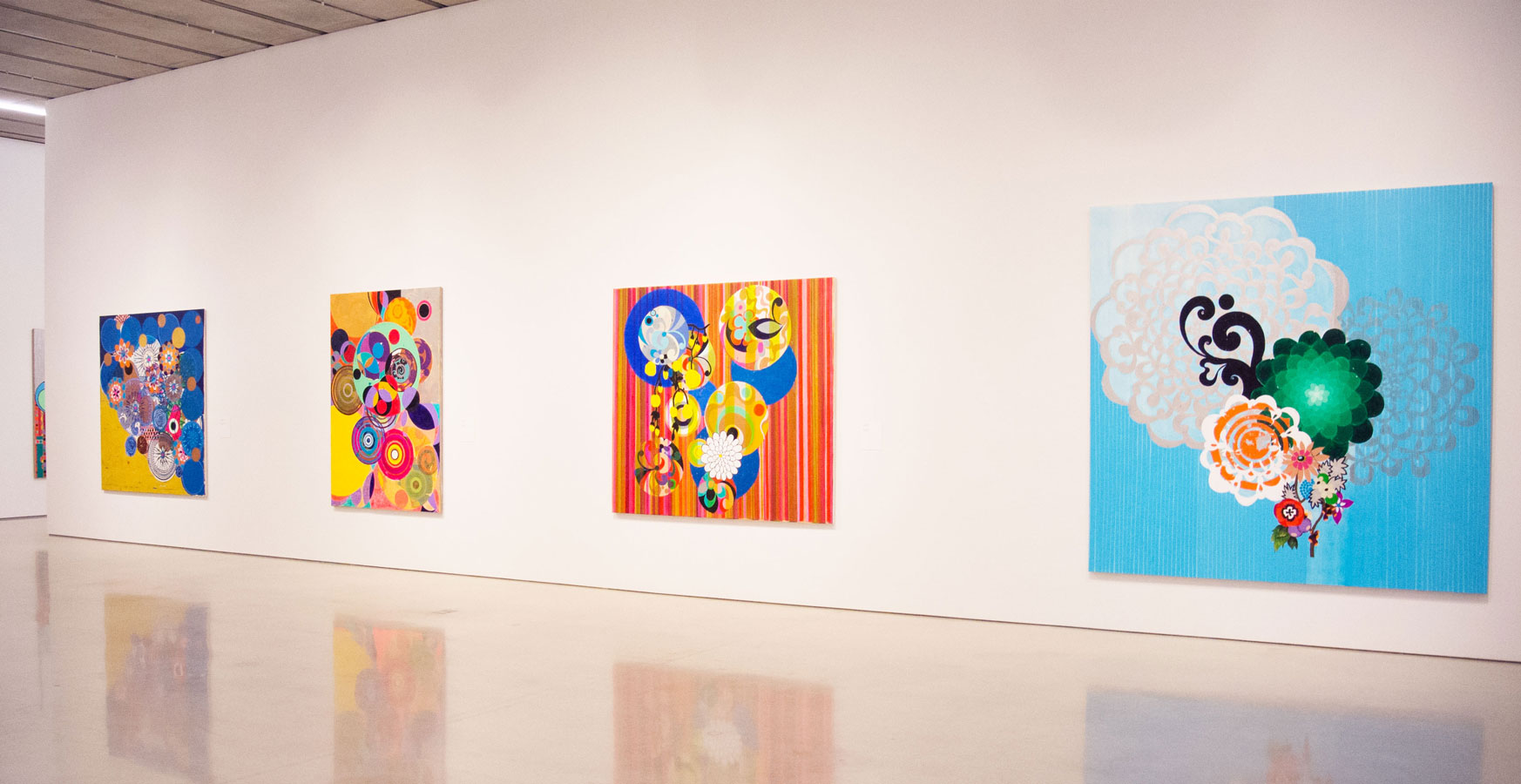 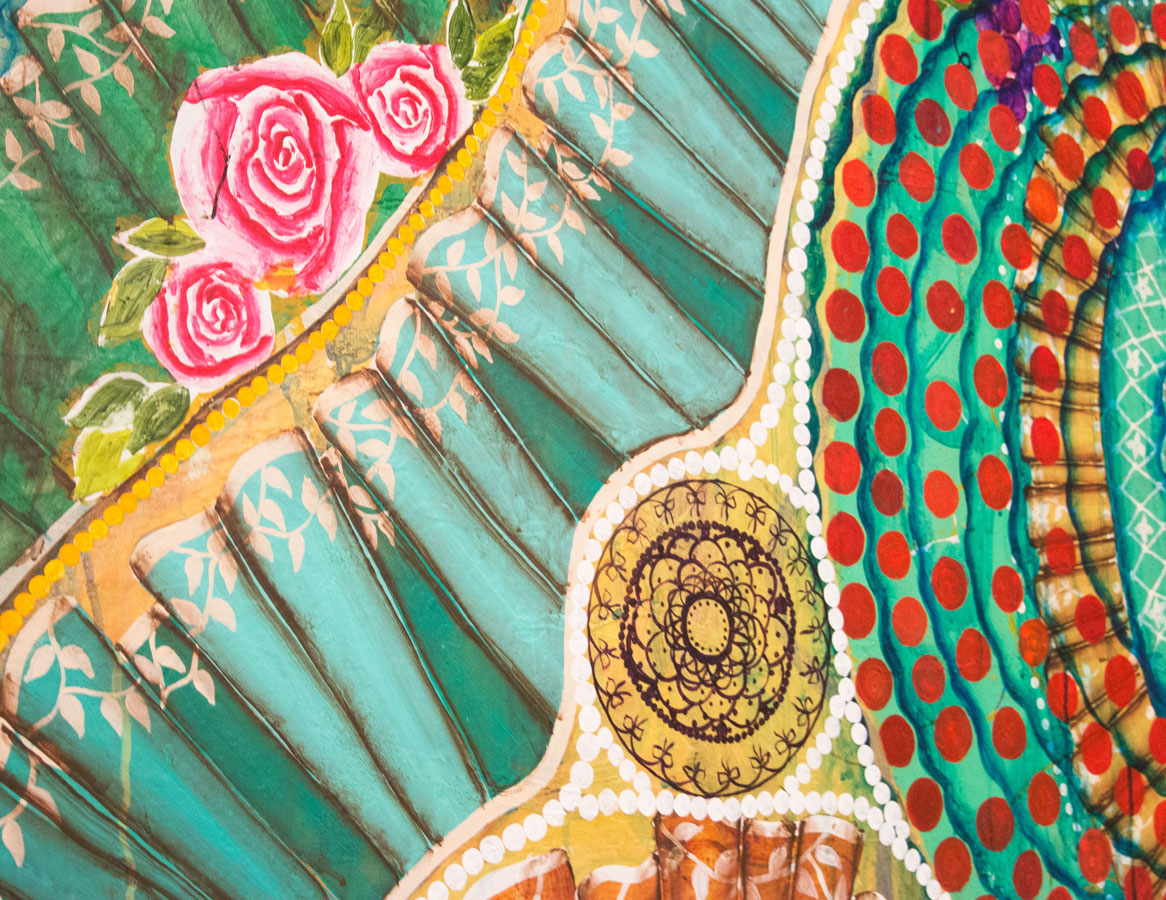 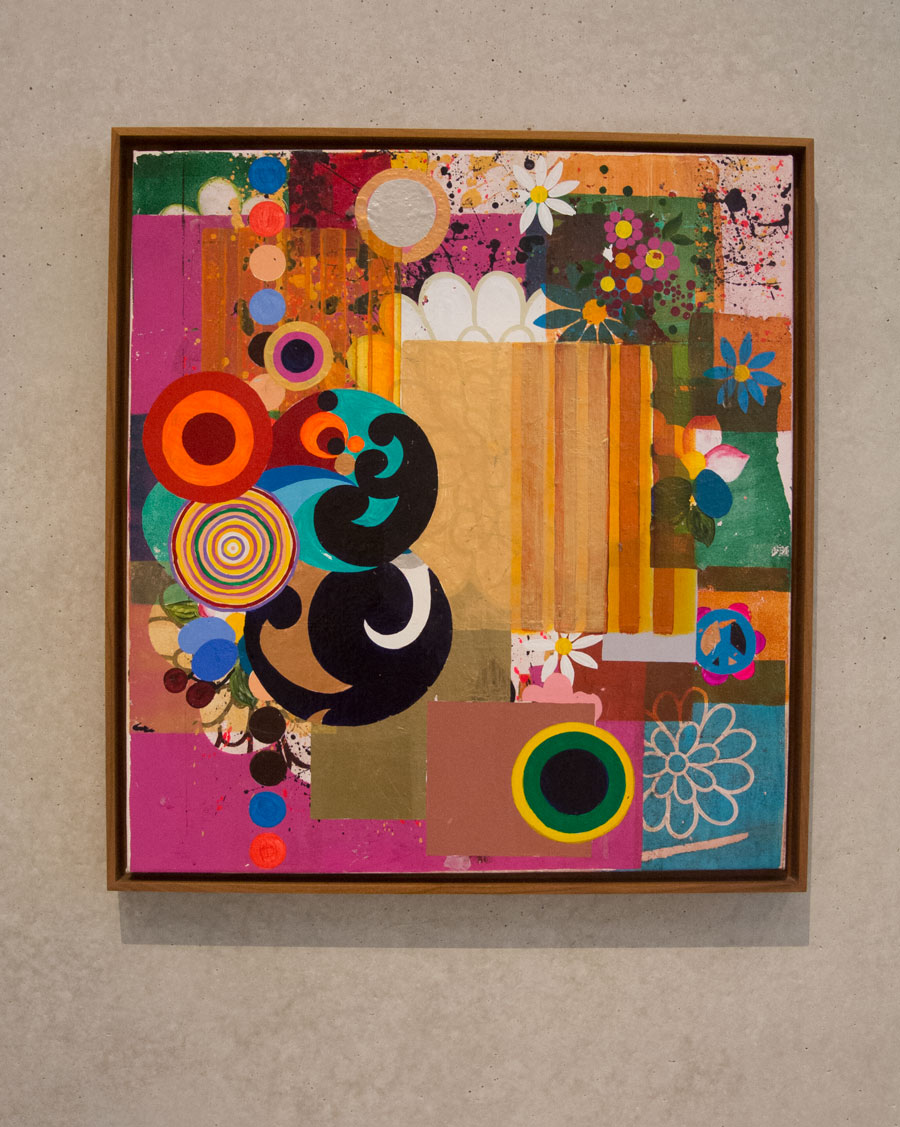 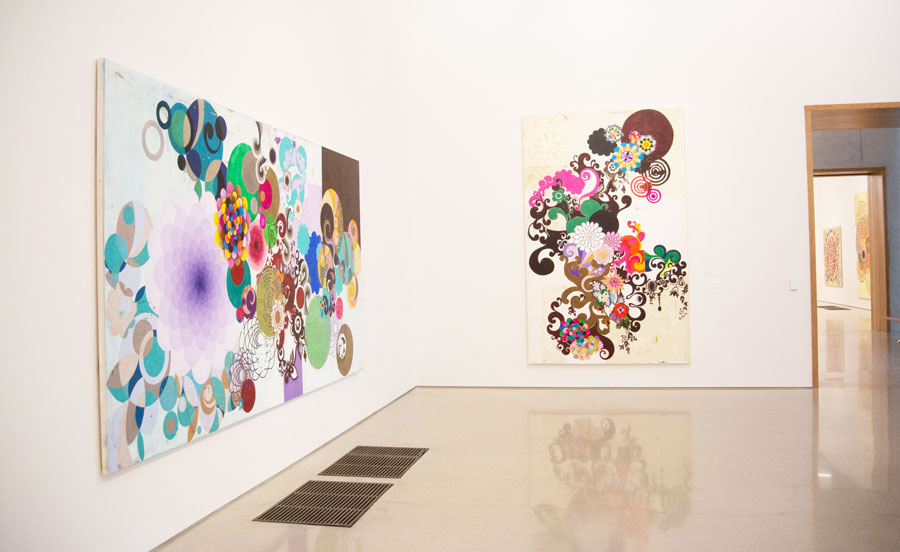 For today’s #makeupmonday post I decided to gather a few of my old favorites. Tarte has been one of my favorite brands for a long time running, everything just always smells and feels so good.

Also cruelty free, so thats a huge, huge plus. 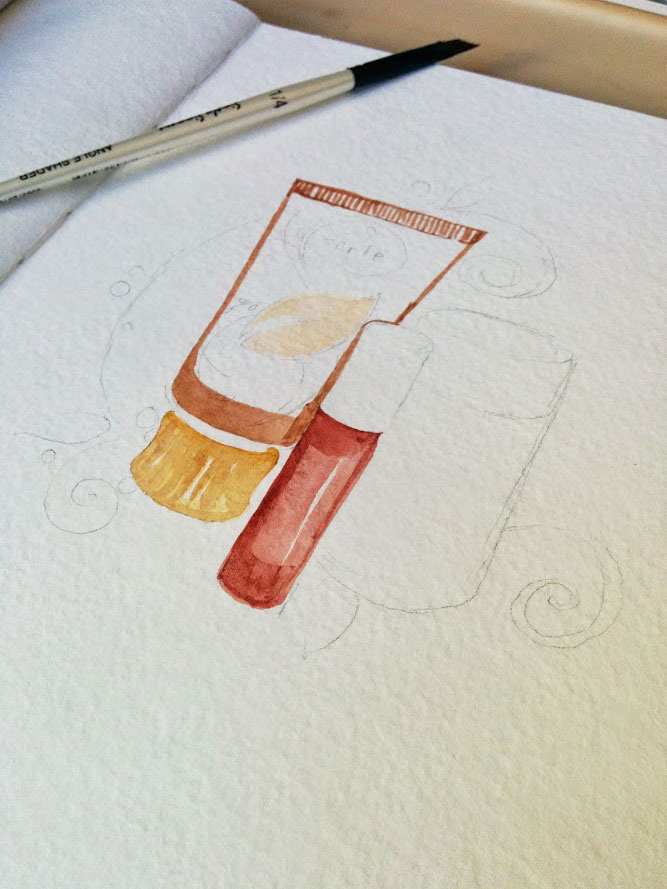 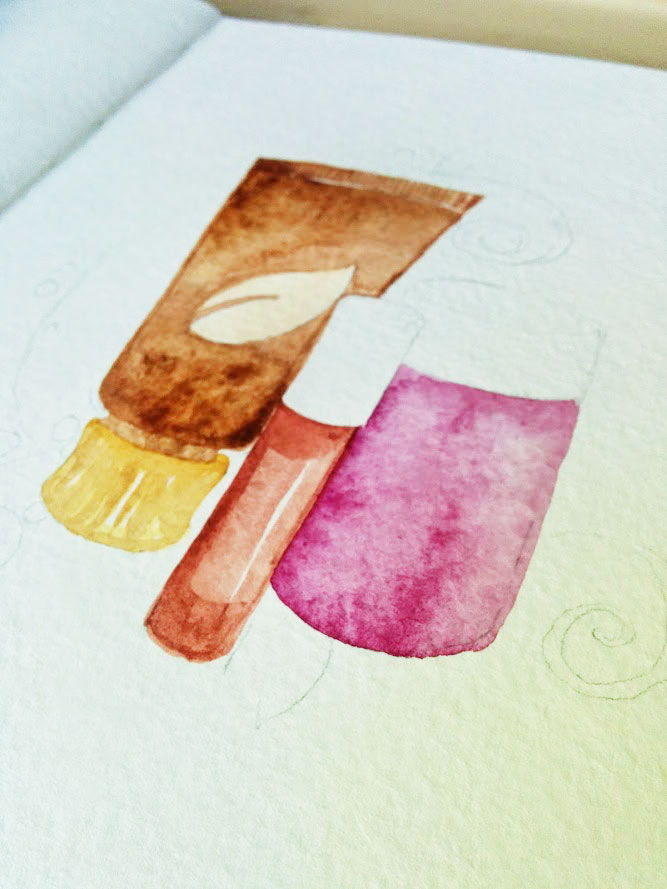 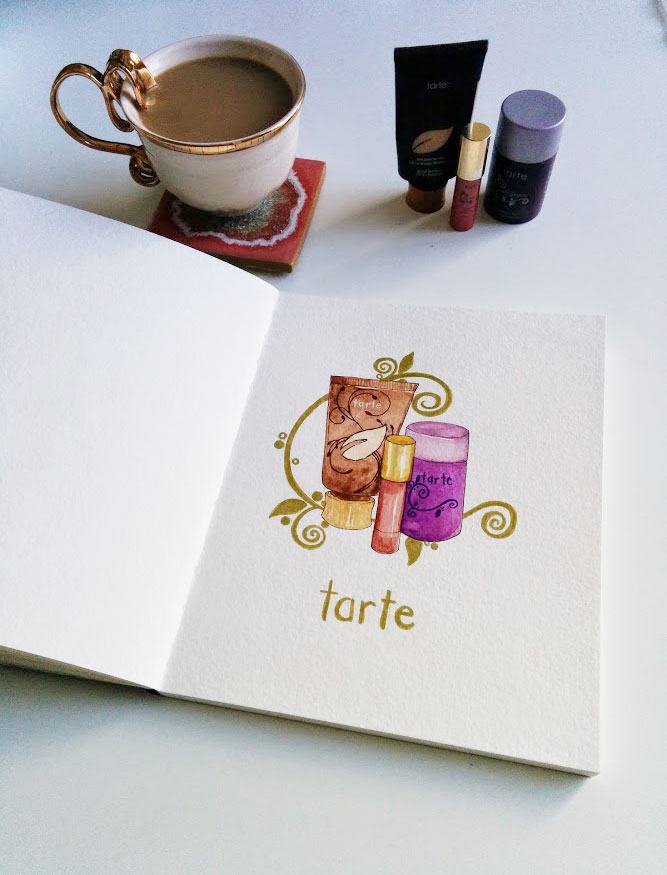 Occasionally on the weekends I like to make something I haven’t sketched for.

No idea what it will be, no overall concept to chase. Just mindless brushwork aided by music (currently listening to the Dragon Age Inquisition soundtrack on repeat) and copious cups of coffee.

So this Saturday I mixed up a few gray-teal-beiges and just painted whatever. 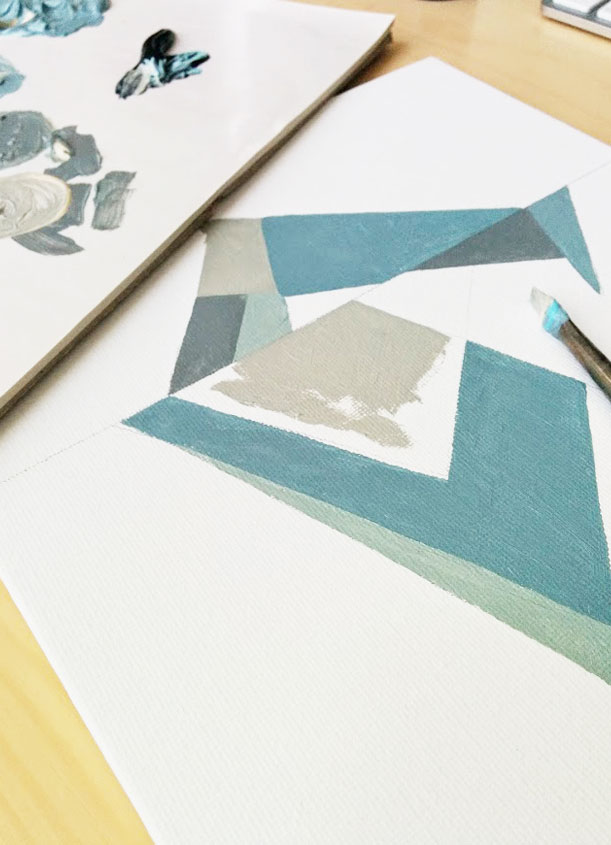 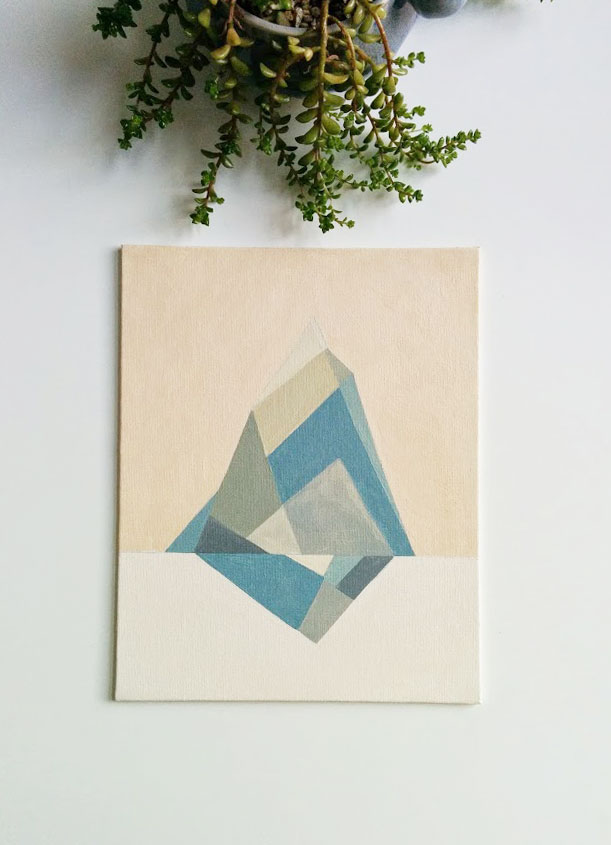 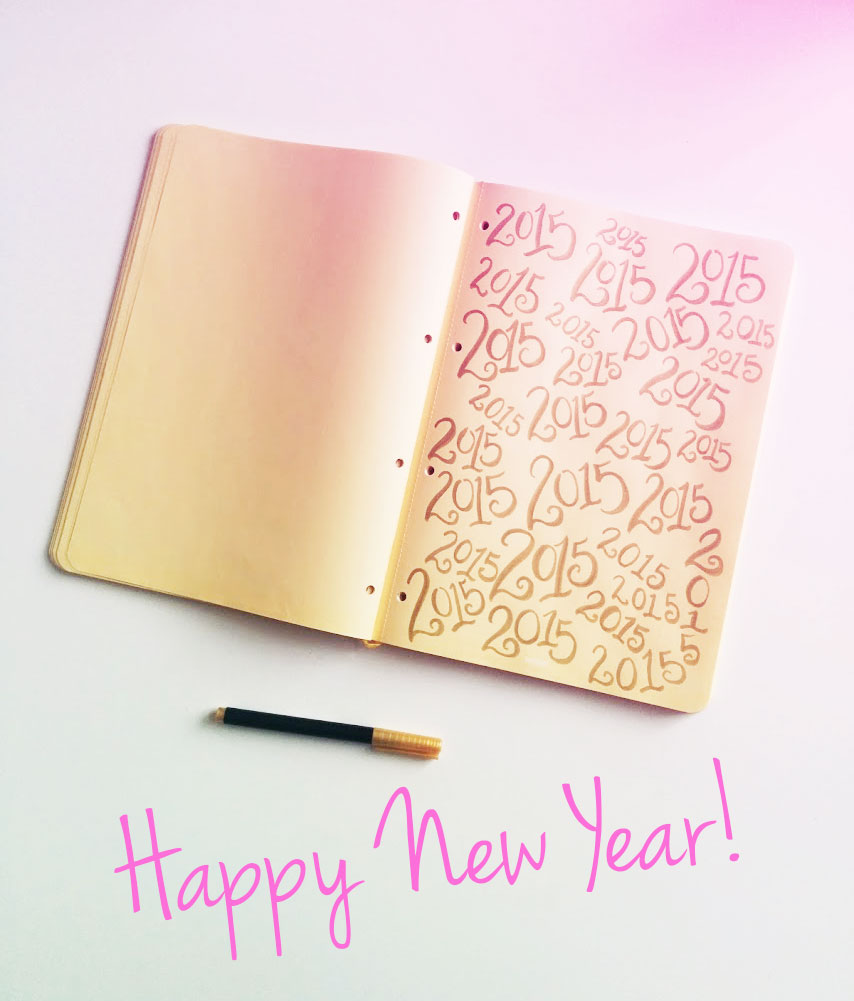 I’m going to go ahead and echo the same statement made by probably most people over the age of 20 or so.

And here I had just gotten used to writing ‘2014’ on the backs of all my work.

I started this year out with a fresh page in my sketchbook and practiced writing the new year. (I know it will still take a few days to naturally write 2015 instead of 2014, but a little extra practice never hurts!) As I drew out the numbers I thought about the previous year, recalling all of the wonderful things that we experienced and all the things I hope achieve in this new year. I don’t really do resolutions, but I do believe in greeting the new year with intention.

I said goodbye to the year that saw us live abroad in Barcelona and Berlin, the year we road-tripped down the west coast, our first anniversary. The last year of my twenties (bring it 30!) and the first of year as an artist full-time. There were struggles of course, but all in all 2014 was a fairly spectacular year. 2015 has it’s work cut out for it.

I’m hoping this year will bring a bit more organization, maybe a little more emphasis on keeping my space clean (seems to be a running a theme, my studio space is always 2 shades away from a complete mess) and a much better inventory system. Shipping this year seemed to be punctuated by constantly running out of supplies. I’m not sure what that system is yet, but I will be experimenting with a few different ideas throughout January.

Another thing I’m excited to try, is the kickstarter project of Angela Trinidad. Normally not one for planners, I am finding myself drawn to the layout and intent of her Passion Planner. With a focus on organization for 2015, it seems like a fitting purchase for the start of the year. Unfortunately I saw the project a bit ago but didn’t back it in time — and new orders aren’t shipping until late February. But they’ve provided a PDF of the entire book for free once the link is shared on social media, so I’ll print the first month or two until the real book comes.

What about you? Any exciting intentions for 2015? 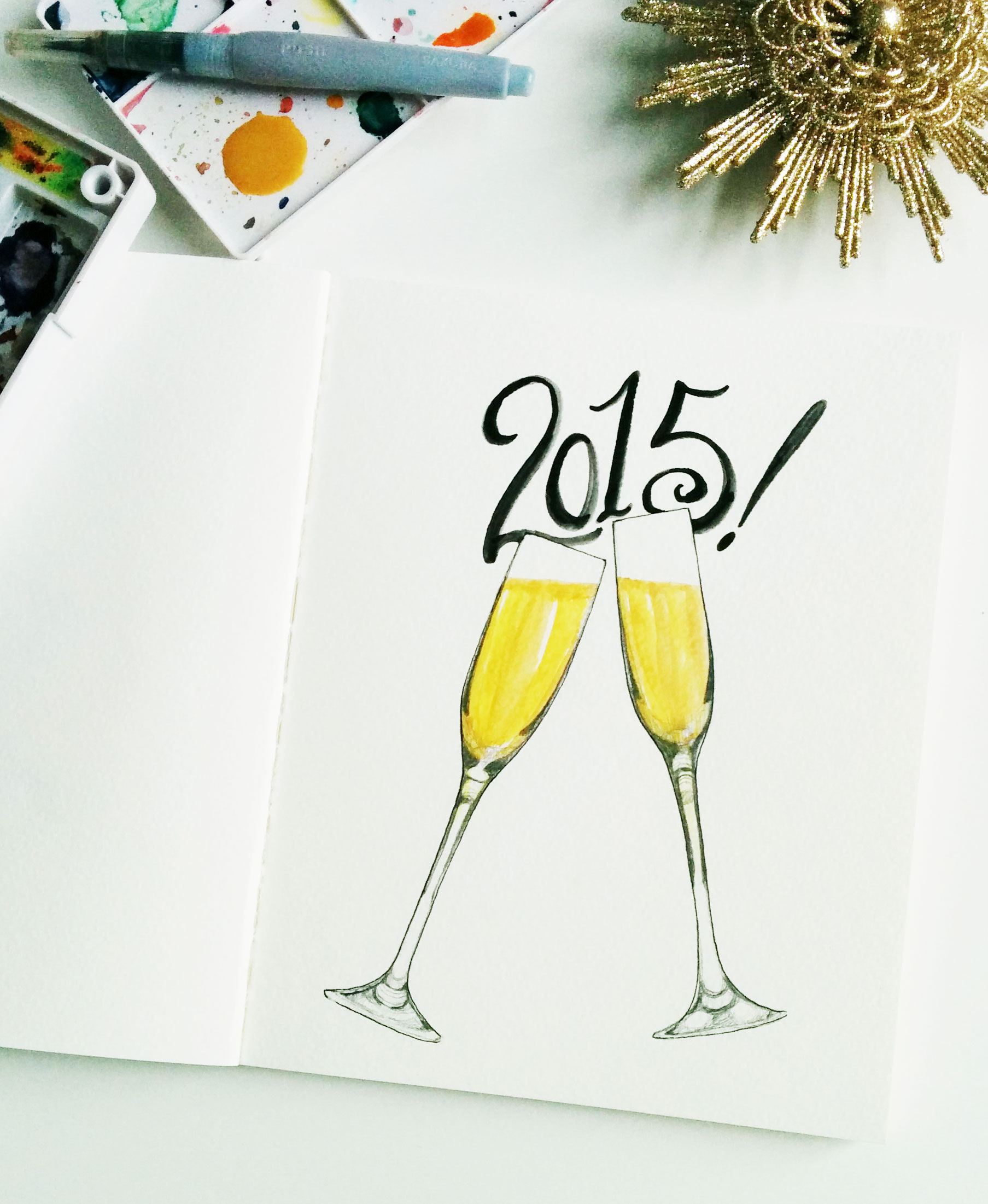