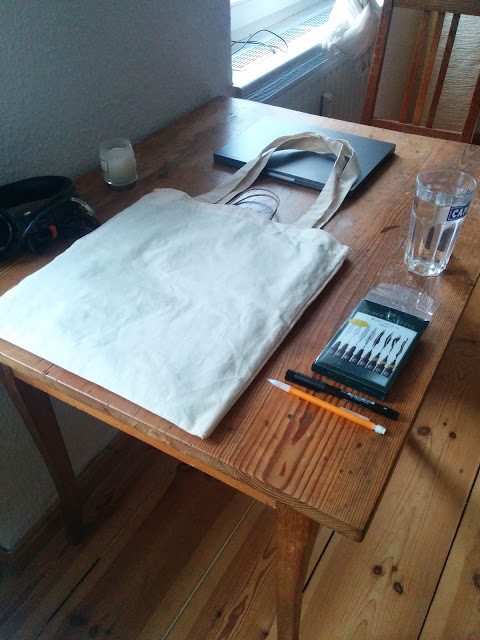 Last Sunday we visited the

I decided to draw a fawn face, as that was something I could whip up fairly quickly and without *too* much risk of messing up and destroying the bag. Although, I guess at two euro, it wouldn’t be that big of a problem — just a hassle to go out and get another. 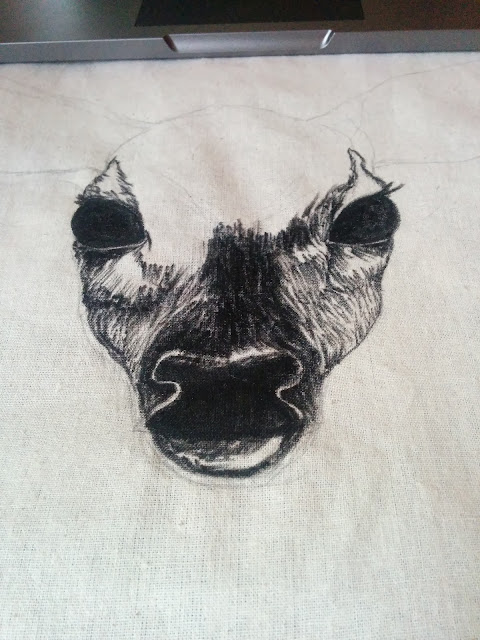 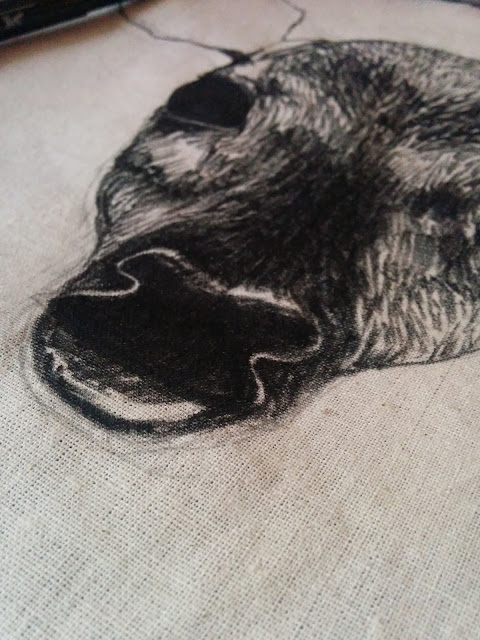 Thankfully I finished it up right as I lost my sunlight. I love the little flat we rented, but after about 5:30, all the good drawing light is gone. And the few lamps in the places don’t offer too much in terms of strong light. Not bad for sketching or making notes, but definitely not great for a project without much room for mistakes. 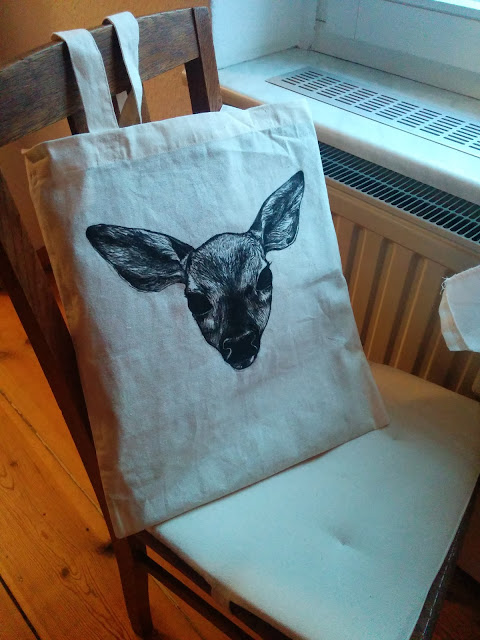 I am super happy with how it turned out. The original plan was to draw magnolia branches and flowers behind the head, but as I lost the light, I decided to wait. I’ll use it for a bit as is then decide if I want to add anything more. 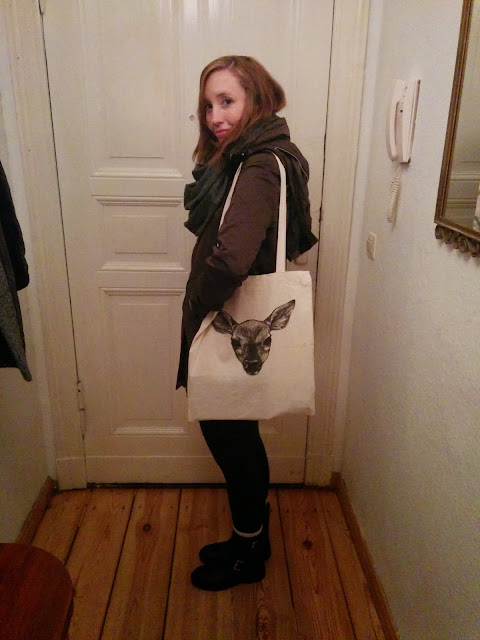 And now we are off to find some pizza. 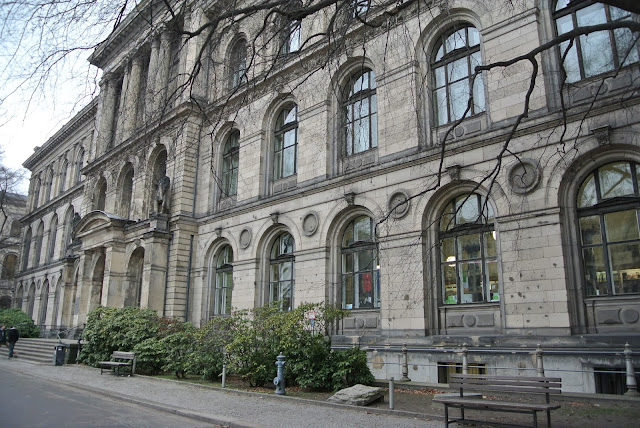 After a few days shut inside working (and avoiding the chilly dampness) I decided to visit the Berlin Natural History Museum. The museum is a nice little 30 minute tram ride from our flat into Mitte, the center of the city. I was happy to get a seat by the window, I absolutely adore the view from the tram. All the little shops, the graffiti, the people, the Bäckereien… I would seriously just ride the tram in circles looking out the window if I could.

I arrived at the museum about 10 minutes before a downpour, (which is lucky for me, I was carrying all my drawing supplies!) and upon entering I was immediately greeted by two massive, breathtaking mounted Brachiosaurus skeletons. One of them also has the honor of being the tallest mounted skeleton in the world.

I spent forever in this room.
Jurassic Park came out when I was in 4th grade and it’s safe to say it left it’s mark on me. The height of the skeleton was staggering, I felt dwarfed, insignificant and I couldn’t help but imagine the beast covered in muscle and gray leathery skin. Munching on leaves. And then the theme music to Jurassic Park started playing in my head, and then I decided it was best if I continued on.

Leaving this room, I entered an alcove with a whole zoo pinned the wall. 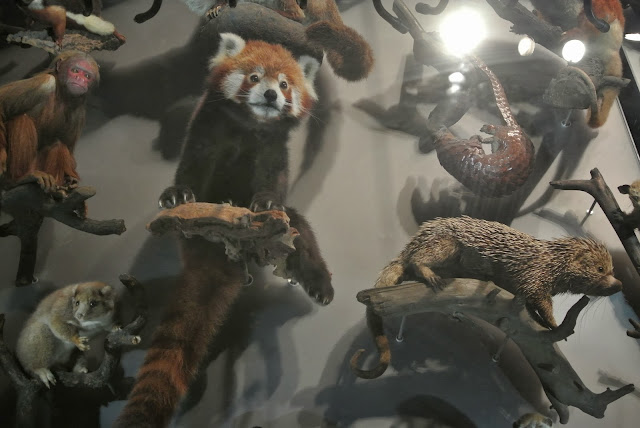 I immediately sought out the nearest bench and whipped out my sketchbook. 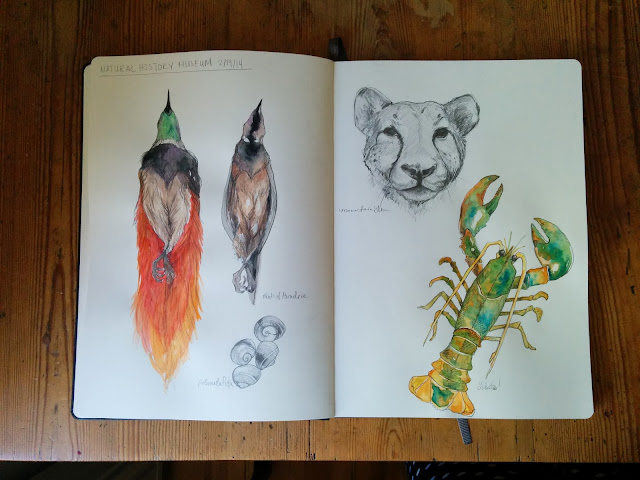 Due to the influx of crowds (which seemed to undulate between grade-schoolers and retirees)I didn’t have the time, nor view to draw everything I wanted. Ah well, I suppose that’s what a camera is for.
And then, the room of preserved fish. 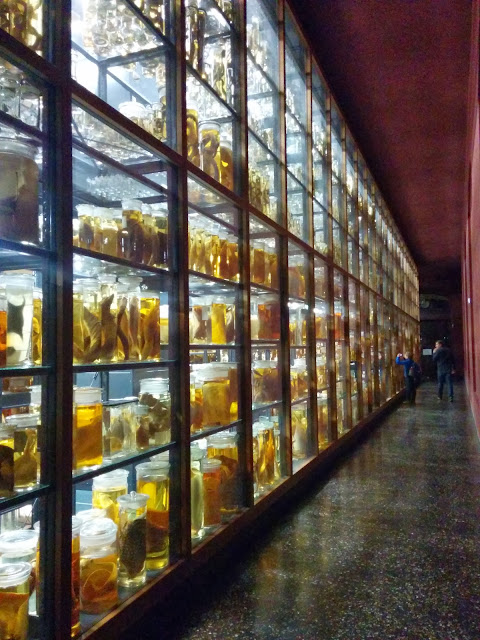 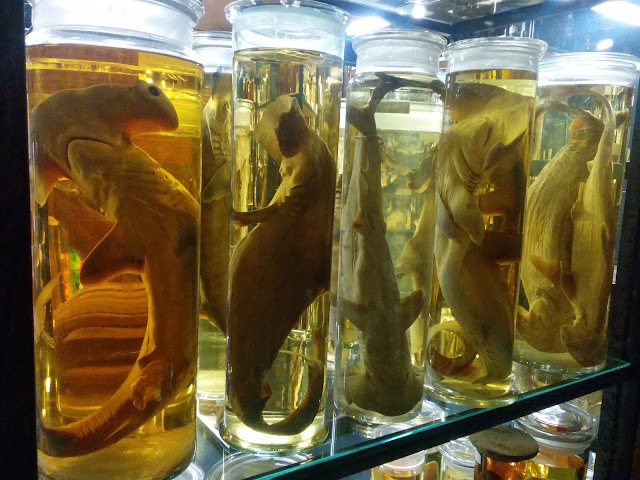 It is really, a whole room just for *just* preserved fish. Fish from last year, fish from 1905, fish from probably many, many years before, all in various jars, in various states of decay. The room was chilly, it was hard to examine each jar – though I wanted desperately to see the years of embalming. Some species I recognized without knowing the German equivalent, but others were completely alien.

I understand the science behind it, but I was a bit sad that the embalming fluids remove all hint of the animal’s original coloration. I would have really enjoyed seeing a more accurate depiction of the fish in life.
That means I should probably go visit the aquarium next. 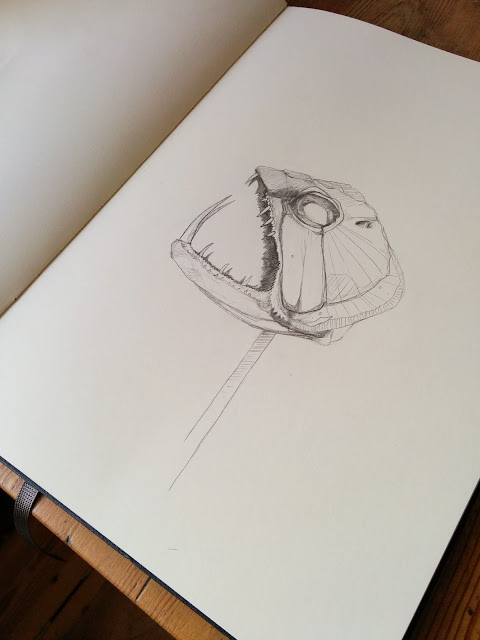 Sketching here was great. Having access to an animal who is essentially frozen in a pose felt like a combination of a trip to the zoo and the best figure drawing class ever. 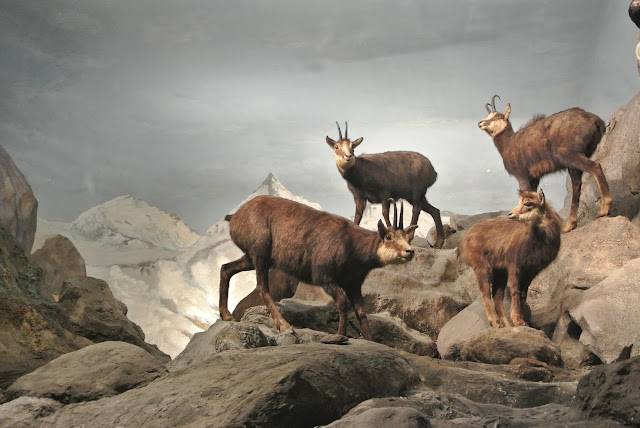 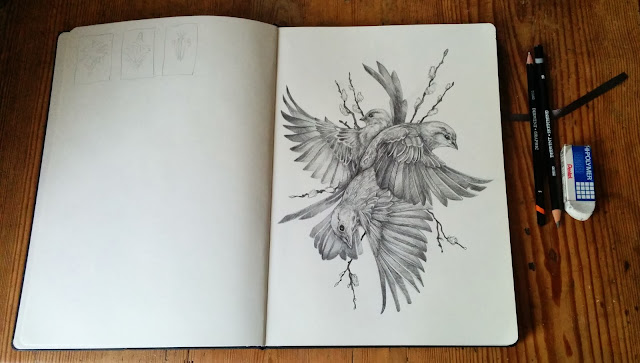 I’m pretty excited to bring these to my large paper. I had fully intended on using the paper I packed, but having stumbled upon the most fantastic little art store ever – I am finding myself incredibly tempted to blow the rest of my budget for the month on new paper.

Valentines Day present to myself perhaps? 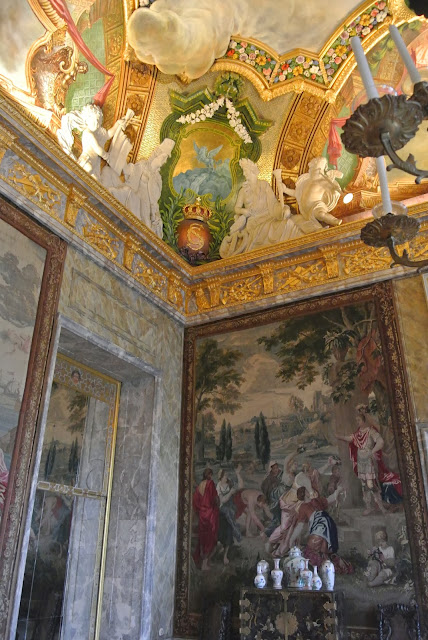 Family crests have always intrigued me. I appreciate and enjoy the symbolism (maybe symbolism isn’t correct in all cases — ‘allegory’ might be a better word in certain instances) found in the images and text displayed on rafters, shields or ceremonial pieces. Walking around Schloss Charlottenburg this weekend, taking in the awe-inspiring murals on the ceilings and humongous tapestries all tailored for that specific family (moreover Sophia Charlotte) inspired me to explore the theme a bit further.

I’ve sometimes wished that I could uncover one that might have pertained to my ancestry, but I’ve never had any luck in my research. Without a personal frame to start from, I decided to sketch out a crest that might symbolize what I’ve come to know of Berlin in short time here. 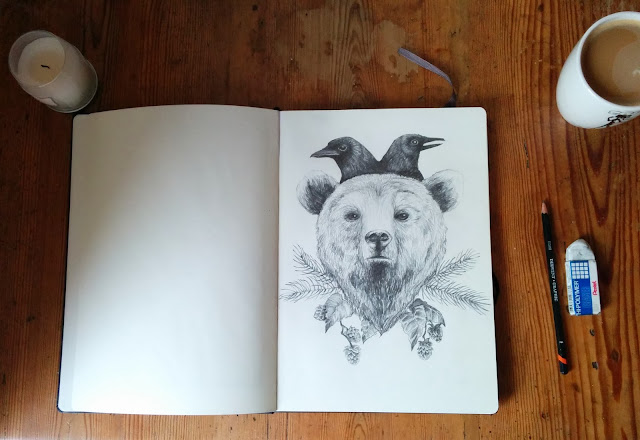 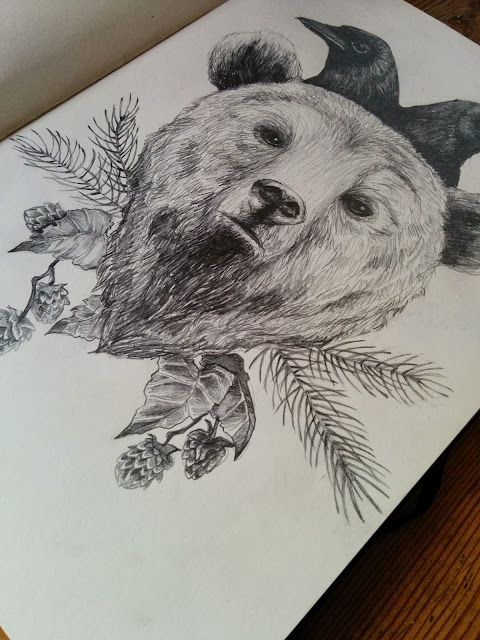 Bear; The Bear is a symbol of Berlin. He’s everywhere here (in pictures, not in real furry bear-form)
Magpies; Berlin has the biggest Magpies I’ve seen in my entire life. The huge, fat black and white crow-like birds dominate the empty spaces of the city. I love them.
Evergreen; abandoned Christmas trees are piled up behind most apartment complexes. I’m amazed they are all still so green and relatively fragrant in their spots in the yard. A lot of them have also been re-purposed to serve as insulation for more fragile plants (roses, etc) which I also love.
Hops; An obvious nod to the beer culture (apparently you can walk around with an open bottle of beer here) but one can also find hops growing along the remains of the Berlin Wall.

I have a few other sketches planned that work with this theme as well. I’m hoping to spend a bit of time on whichever sketch turns out to be my favorite and transfer it to one of the extra large sheets of drawing paper I brought along. For now though, I’m off to the art store to find some workable fixitiv… bit of a necessity when working with pencil 😉 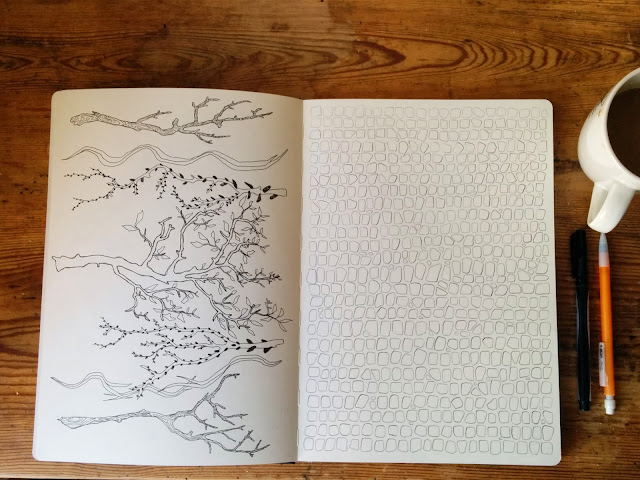 I think we are pretty well settled into our little flat in east Berlin. The jury is still out on the function of a few of the kitchen appliances, but all in all we are feeling pretty comfy and cozy here.

We’ve gone out and done a bit of exploring around our own neighborhood – learning the layout, finding the grocery stores and making note of neat places to eat as we trod along the cobblestones. Also getting bread from nearly every bakery we stumble upon… because why not? Butter stuffed pretzels are apparently a thing here. I feel like I’ve died and gone to a sweet, buttery, salty heaven.

The majority of our time here is of course, still spent working. I’ve been trying to keep regular “studio” hours in the corner of the bedroom, with my paper, pens and pencils strewn about the floor. I’ll admit though – it’s a little hard to stay on task knowing how much neat stuff there is outside that I haven’t seen yet. I’m sure once we get a few more ‘touristy’ activities under our belts that feeling will start to wane.

I’ve also been attempting to spend a good bit of time in the mornings absent-mindedly sketching at the kitchen table. It’s a really great way to start the day here. Or anywhere, really — I’d love for this habit to follow me home. At home it’s easy to fall prey to “I can’t sketch – I need to do laundry.” or “I’ll sketch when I get back from the store…” (which invariably never happens). Here, with both of these distractions minimized if not all together deleted, I feel like I can simply sit at the table while the coffee is brewing and just. draw. Combine that with a butter-filled pretzel and I am in paradise

What about you? Any tricks for keeping a daily sketching time sacred?